Sorry for being so late to post. It's not been a good week. This was supposed to be my peak mileage week, including a 30 mile event but things didn't go at all well.

I posted last week that my Peroneus was causing me sufficient pain that I couldn't walk properly, let alone run. By Tuesday it had not quite improved sufficiently to run, but I did still go to yoga.

On Wednesday it did feel mostly ok, and I decided to chance a run. I did a local 10k trail route, but towards the end, the pain came back. As a result I dared not do the 3 mile tempo run on Thursday; hoping to allow maximum time to heal before Sunday’s event. I did still do an hour in the gym, and a little time in the sauna afterwards.

On Friday I had more physio on my knee, but also had some attention on the Peroneus. It was painful when worked on, as I expected it to be. Stretching and rest were ordered, but I had to do the event 2 days later of course.

On Sunday I packed 5kg of weight into my pack and drove to Greetland in Yorkshire to take part in the 30 mile 'El and back LDWA event. I packed a lot of warm clothes because the forecast had given out heavy snow. On the way there I had to stop a couple of times in motorway services, lets just say I had an upset stomach. By the time I got the event, I felt a little better. There seemed to be no official start, and I hadn't realised people were just drifting out of the door, whilst I sat patiently and waited for 9:30am. Below is the route I followed, with my speed and distance shown. You'll note that it's 20.5 miles and not the 30 mile route, for reasons you'll discover later. The route I took ended up being a hybrid of the 30 mile, and a 15 mile shorter route. 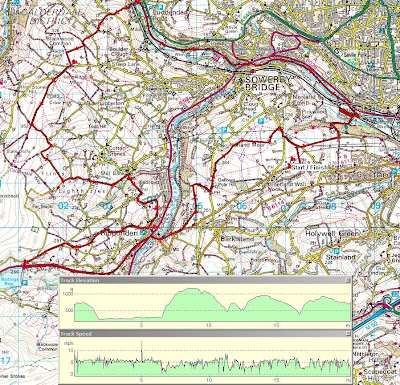 I set off at 9:30am, the last person to start and obviously the one running at the slowest pace with the pack weight I carried. I soon lost sight of the few runners ahead, and followed a route I found on the internet for the event on my GPS. I knew the route had changed slightly due to a footpath closure, but was on autopilot and ended up coming to a dead end, adding half a mile on in the process and putting me further behind everyone else. The route then joined a canal for the next 4 miles, so nice easy running. I ticked along about 6mph, probably a little faster than I intended. I had left my time/distance GPS watch at home, so I was guessing my pace.
The weather when the event started was fine, but it started to cloud over as I ran along the canal. 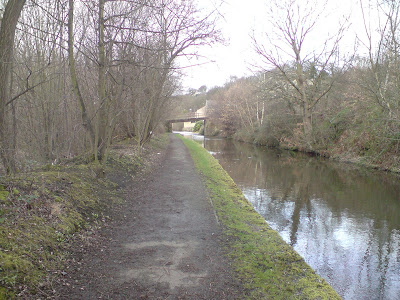 I exited the canal checkpoint 1, and because it had already started to sleep and hail, plus got much colder I decided at that point to put on my waterproof jacket, hat and windproof gloves. I did so, and then set off up the hill, walking, pretty much most of the next 2.5 miles as it was a steep ascent; fist up an old cobbled road, and then stone steps before turning into a rough track, then moorland. I took this photo after CP2 at the top of the ascent, around the 9 mile mark. 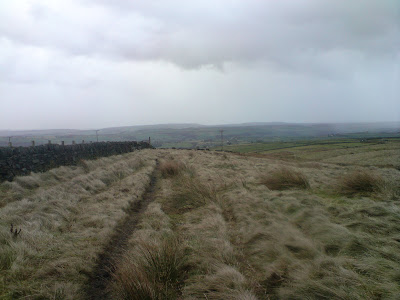 At that point the hail had stopped, or was coming in short showers. You can see some rougher weather over to the right in that picture. I took one photo looking back, and into the last of the nice weather dissapearing. 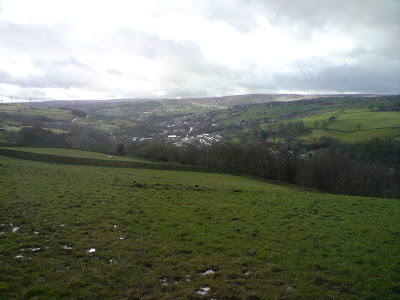 My foot had ominously began to ache after 4 miles, but got substantially worse by the time I got to 10 miles. Running on it was painful, walking less so. Still, I did run whenever possible. There was a short moor section, including some farm paths and then road before a descent into Ripponden at 12.5 miles. At this point those doing the 15 mile section went down the hill. I said goodbye to a few people I had caught up and been running with for a couple of miles, and then made my way sharply up the hill. My foot was really very painful now, and I had half considered taking the 15 mile route before I headed uphill, but I don't like accepting defeat without any effort.

The wind picked up, sending the temperature well in minus figures, and it alternated between a heavy hail storm and stinging sleet. At this stage, going uphill on a farm track I was beginning to get cold. My windproof gloves were wet through, and my hands very cold. Despite having a mid layer and waterproof on even my torso was cold. I was wearing compression tights, which were already wet through, and with the icy wind my quads were getting cold too. I've never had cold legs before on an event. I think my slowing pace, due to the foot injury was to blame. Usually your legs are warm because they are always moving, but not this time. I nipped into a farmers cow shed to shelter from the weather. It was a dry stone wall structure, with a roof offering excellent protection. I stripped off my jacket and gloves. I put on of my two extra fleece jackets, before putting my waterproof back on. I then put on my Gore-Tex ski gloves and hat again, pulled up my hood and set off. That little stop had probably lost me 10 more minutes, but you only have to get caught out by the cold once (as I learned in Tenerife once) to be extra cautious.

I glanced across and up to the hills on Rishworth Moor. I knew that later in the route was a 7 mile pretty miserable moor section up there. The hill tops already had a light snow covering and were lost in cloud, so I imagine it was pretty miserable up there for those 40 or 50 people already running or walking through it.

The terrain levelled out, and I started to run again, but my foot was hurting a lot with every footfall. It felt pretty hopeless. I could struggle on another 15 miles, with pain every time I put my foot down and could potentially make this injury a lot more serious than it is already. I continued on, running down to the nearby checkpoint, on the damn at Baitings reservoir, just before the long moor section. I was greeted with a warm drink from the guy at the CP. Full marks to all the CP staff, who manned those CP's all day incidentally. I asked him what my options were for short routing, as I had decided that I needed to stop the foot getting any worse. I was at the 15 mile mark, and was directed back into Ripponden to pick up the 15 mile route. I glanced up at the moor before I went and it looked like it might brighten up, but I looked down at my foot and knew that wouldn't. Decision made, I thanked the guy at the CP and set off down a main road into Ripponden.

The weather did brighten up for about half an hour but on the sharp climb back up the other side of Ripponden the hail came down once again. I picked up one of the 15-miler route CP's and then headed up and over the last couple of mile short moor section. 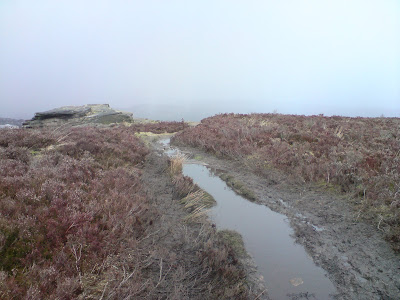 The moor was predictably fairly muddy and slippy, but the softer ground was easier on my foot. The moor section ended at then I retraced my steps as the route joined a section at the start along a green lane, just as the hail pelted down again. 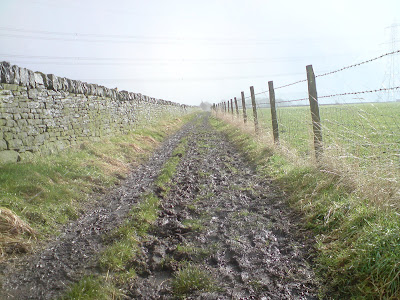 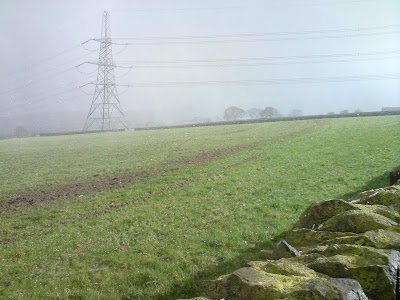 I made it back to the start in little over 5 hours; so just 4mph average for the 20.5 miles completed. It included 3000ft of ascent, so it wasn't a total loss, and I know I made the right decision to short-route with the foot injury getting worse. Unusually for me, I ate a meal at the finish; which was a Yorkshire meal of pie with mushy peas and mint sauce! Also on the way back I was hungry so I bought a chocolate bar. Neither of these things is in my normal diet. To compound things I got back and decided to eat a Chinese beef curry meal, again something I rarely eat.

An hour after eating the meal, I got a terrible pain below my right ribs that lasted most of the night, and into the next morning. It was a very small focused place, so I was a little concerned, and saw the doctor. He said it could be anything from some gastric virus right through to gall stones. Because I was seriously ill in 2000 with acute pancreatitis, he ordered a blood test (to test liver and amylase levels) and I'll get an appointment through for an ultra sound in a month’s time (to check for gall stones). I really hope it is just a virus. The blood test should rule out my pancreas pretty quickly, by the weekend I hope. Believe me, I remember what pancreatitis pain was like, and this isn't it. Gall stones, I'll have to wait a while longer to find out. I was still pretty sick all day Monday, and still last night. Today I feel quite a lot better, but I'm still under the weather. I'm only eating fruit and vegetables, pasta, potato and rice this week; plain food. No meat, dairy, spicy or fatty food. I eat a low fat diet as it is, so cutting out extra fat is easy, but I do eat chicken, fish and have skimmed milk. Just herbal tea's, and whatever fruit I juice myself, to drink. So, if it is anything nasty this should give my body some time to recover. If it's just a virus, then nothing has been lost either way.

I've had some extra physio on my foot today (Tuesday), but I'm still limping around. It could well be I have run my last step before the race, and I'll have to cycle instead to retain what little fitness it feels like I have gained in the last few weeks. I won't go to yoga tonight either, and I will definitely cycle Wednesday, Thursday and probably Saturday. So, not great news all round this week. Hope your week is going better!
Posted by Rich at 11:55