This week I didn't train on Tuesday evening, so I could go and get some chiropractic treatment (and a little sports massage too).

So, to make up for that missed session I ran 10 miles on Wednesday with a 5kg pack. There was around 1000ft of ascent and I ran average 6mph. I wore the same pair of shoes I used in the MDS to see if they might carry me through this event too, without having to buy another pair. For the first few miles my feet suffered, as even though the New Balance 1100MDS have quite a lot of cushioning, my sensitive little tootsies could tell the difference from the luxury cushioning road shoes I've been wearing for months. Either that, or the cushioning on the 1100 shoes has deteriorated. I estimate I've covered 250 miles in them, so normally I'd say they should be ok. However, I will be covering another 150 miles in them in South Africa which would tip the total over the 350 miles I usually change them at. Towards the end of the run my feet felt better, so I decided I'd use them at the weekend on the 30 mile LDWA event.

On Thursday I did my speed session. It has been pointed out to me in comments from my last post that I shouldn't be trying to beat by interval target times, as this could prove detrimental. However, not armed with that knowledge when I did this weeks session, I went out and blitzed most of the target times, as seen below. 400M target - 1:36, 800M - 3:12

Now I know better, I will ease off and stick to the target times for the next couple of weeks. Especially since I am now tapering my mileage. My right ITB was still a little sore, but it didn't feel too bad on either Wednesday or Thursday.

I also went to the gym on Thursday for my strength and stability gym session, and half hour sauna. I'm warming myself up (excuse pun) for having a nightly sauna sessions for the next couple of weeks, in an attempt to increase my sweat rate and maybe gain a little acclimatisation in the process. I'm not sure there is any scientific study to say that this (Sauna) works, but psychologically it makes me feel better, and that is equally as important I think. If I think I've done all I can in advance, to prepare for the heat, then I won't have a nagging worry in my mind that my preparation is lacking.

Preparation was certainly lacking on my part, for the event on Saturday, the 30 mile Open to Offas LDWA event. I'd had some flooring put down in my house on Friday evening, and as a result the whole house was upside down. I got my computer back up and running about 10pm. I hastily transferred the route onto my PDA and then made my packing preparations. By the time I finished it was 00:30, so I didn't get to sleep before 1am and then had to be up at 6:20am to drive to the event for the8:30 start. Usually I take the time to study the route, memorize where and for how long there are uphill, downhill and flat sections etc. I didn't do any of that. All I knew was there was a lot of up and down, and very little flat; a total of just over 7000ft of ascent. Also, I usually ensure I have directions to the start all set out, but I just gambled that setting my cars sat nav to 'town centre' of Cilcain (the small village where we started) would work.

Well, where the sat nav thought was this little village, wasn't. So, I got a little lost. This meant I missed the start, setting off 15 minutes after everyone else. 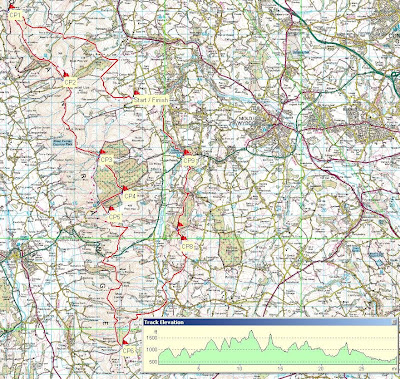 A lot more details on the event can be found here.
http://www.beyondmarathon.com/ultramarathon_event.php?eventID=1465
I wore the 1100MDS trainers, and for the first time, some compression tights on my legs, my usual Raidriders shirt and a 6.5kg weighted rucksack. The full length tights certainly drew a few confused glances in the hot sunshine that we enjoyed all day. The day was very warm for this time of year (about 20-22C), but still a good 20C down on South Africa.

The first 5 miles were straightforward enough; a couple of small hills but nothing too serious. I caught many of the walkers up before the first checkpoint and a few of the runners too. CP1 to CP2 was where the route followed the Offas Dyke footpath, and the serious climbing began.

As you can see form the hill profile, it is just steep uphill, then downhill for the next 15-20 miles.

I made a critical error just before CP2, following some runners in the distance rather than my own navigation. I descended a steep hill called Moel Arthur, apparently Queen Boudica's burial place! I got to the very bottom and wondered why I had lost sight of the other runners. I realised to my horror that I should have diverted to get to the very top of the hill and a checkpoint, before descending. So I added a mile extra onto my route and had to make a very steep ascent, which really took it out of me for such an early stage in the race (8 miles).

I eventually got back up, checked in, and left again, loosing around 20 minutes I'd guess and then had to start catching up and passing all the people I had already passed(after alread starting 15 minutes behind them and catching them once before, arrggh!!!). I had a lot of problems with my Bluetooth GPS which kept losing comms with my PDA. This drove me nuts all day and I lost 10 or more minutes sorting that out as well.

The next checkpoint was on the highest peak of the day, Moel Famau, shown below (plus views to the sides) but here seen in winter for some perspective of the mountain range (Clywidian) of the Offas Dyke

Next there was a welcoming 1 mile descent to the next checkpoint. It should have been welcoming but my right knee felt weak. As the run progressed it actually turned out to be my right quad muscle in spasm. It cramped on every footstep when climbing and made my knee feel very unstable when descending. I stopped some miles later and found a painful bunched muscle. I gave myself some impromptu massage which sorted it out. Anyway, I descended to CP4 where there was a lot of food laid on. There were 3 routes running; a 14, 21 and 30. I declared I was going on for the 30 and after a 5 minute stop to top up water and food set off. I was warned that the next climb Foel Fenlli was very steep. If you glance at the route map above, I'm certain you will be able to pick out the right hill (around 14 miles)! It's not a massively long climb, but it is steep, with sets of stairs from some of it. Just before the half way stage, and already after a lot of tiring climbing it wasn't very welcome. I happened to be with a group of 4 people I'd caught up and made the climb with them, so chatted away to take my mind off the screaming muscles. At the top (CP5) I resumed running on my own again.

Cp5 to Cp6 was only 5 miles, but it felt like more, over two or three more climbs. I was working hard with the weight, and now in the warmest part of the day, sweating quite heavily.
The scenery as you can see in all the photos was superb. This taken just before CP6.

I'd been slowly catching up another runner between CP5 and CP6, and came into that CP just behind him. I sat and refuelled for 5 minutes and then ran with the chap, Roger, for the remainder of the route. He'd done the route 3 times, so guaranteed I didn't get lost again. I could probably have pushed harder if I was on my own, but I rationalised it as 'time on my feet' being more important than a fast finish in preparation for South Africa. Also, I had lost so much time with the problems earlier I was averaging a pretty poor pace and time anyway.
The worst of the climbing was over apart from a log slog up a steep road, and then onto a footpath onto a Limestone hillside called Pothole Crags and CP8 (there was no CP7). Where these photo's were taken from, looking back across the valley to some of the hill tops I had ran on, an hour or two earlier.

One of me, in all my gear.
There was one final unpleasant climb between CP8 and CP9 where the three routes merged at that final CP. We made another 5 minute stop to refuel and then ran the whole distance from CP9 to the finish along a pleasant path with just a small climb at the end. It took me 8 hours and 15 minutes, which is quite poor, compared to recent performance. However, I was wearing a race weight pack and there was an awful lot of climbing! I suffered a couple of hotspots underneath my left foot, and this has more or less convinced me that the 1100MDS shoes have had their day, and won't make it through another event. I have been wearing New Balance MT800's for the last few months when doing off-road LDWA events, with no problems so I may see if I can get hold of them in a size larger to take to South Africa.
I'll make a separate post about my kit later this week maybe, as I've made a few changes.

My ITB didn't cause me problems on the run, but it was sore on Sunday, along with a few other tendons on my knees and ankles. Still a few lingering aches today, but with less mileage this week I should be ok.
That's it for now. Have a good week
Posted by Rich at 23:06