This week I tapered more than planned. I rested Sunday and Monday as usual, and truth be told I wouldn't have been up to a run anyway. Various tendons were sore or strained after all the climbing on Saturday doing the Open to Offas event.

I then had to unexpectedly work away from home on Tuesday, which was then extended to Thursday, so I missed my run on Tuesday and on Wednesday. Still, it probably wasn't a bad thing to recover from the weekend.

On Thursday evening I ran my speed session. I stuck to the targets of 1:36 for 400M and 3:12 for 800M and ran the splits to within a second or so of each. On the 1.5mile uphill run home, I do as a warm-down one of my ankle ligaments, and left hamstring was still sore, but nothing serious. I went to the gym as usual and did an hour strength and stability, then half an hour in the Sauna. I saw Clive who I used to have PT sessions with, and he asked if I fancied a run the following evening over the Staffordshire moors. 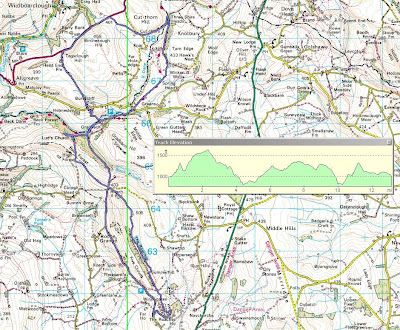 So, after work we drove to The Roaches near Leek, pictured. 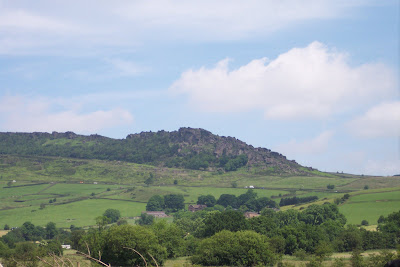 We set off running about 5:30pm. I had no idea how far Clive wanted to run, I figured maybe around 2 hours, getting back at 7:30pm just as it got dark. An hour or so into the run Clive asked me when it got dark, as he had thought 8:30PM!! I told him it was 7:30pm and we would now probably end up finishing in darkness.

The route began my climbing Hen Cloud, then descending before marching up and then running along the ridgeline of The Roaches themselves. Next was a level section for about a mile before a descent into Ludds Church (pictured here) which is a natural cave which was used for the outlawed religious practice in the 15th century (see here). The descent continued to Gradbach Youth Hostel, before long steady climb then descent to the natural turning point called Three Shires Head.

I was carrying water, but nothing else, not anticipating being out this long. Despite the sunny day and amazing views of Staffordshire and Derbyshire it was very cold. I had shorts and t-shirt and was wearing an Under Armour heat-gear top for some silly reason (dissipates heat). So, I was starting to feel a little cold. I borrowed a long sleeve shirt from Clive, as he had a spare as well as a Pertex top. After a steady climb out of Three Shires Head the light was now all but gone, being around 7:40, we were forced to walk several sections on the way back to avoid injury. We descended down a different path to the Youth Hostel again before heading up through the woods towards The Roaches. It was too dark to run this section, and without the bit of light cast from Clive's PDA progress would have been even slower. I stumbled a couple of times, but no damage done. I was quite worried about turning an ankle in the darkness, but got out unscathed. We emerged back onto the road at Roach End, and returned by the road at a run. Climbing back over the Roaches in the dark would have been asking for trouble. We got back to the car about 8:30 and had covered 13 miles with 2600ft of ascent.

It was certainly more than I was planning on doing, and on Saturday my resting pulse was slightly elevated so I took that to mean I was not fully recovered and so should not run. My hamstrings were a little sore again too, so it was better to rest than force out 8 or 10 miles because that's what my training schedule said.

So now I have just one week of quite light training left before I go to South Africa on the evening of the 7th October for the KAEM. I've still not quite got all the food and kit I need so I really had better sort this out. My preparation really has been quite poor, and I'm far too laid back about the event, and bizarrely not apprehensive at all. This could well prove my undoing, so I need to buck my ideas up this week and get 'the fear'.