More of Hills and Dales in just a moment, but first the rest of the week.

Week two of my training has gone well enough. I did my speed sessions on Tuesday and Thursday, raising my intervals target by 6 seconds for 400M (target 1:36) and 12 seconds for 800M (target 3:11).

You may notice that every other split is slightly faster. This is because the 400M and 800M leg isn't flat. There is a slight incline, so I run slightly slower on the uphill and slightly faster on the downhill. The 400M split is very comfortable indeed. I daresay I could raise the target by 10 seconds and still feel quite comfortable over the 8 x 400M intervals. However, the 800M are less comfortable, because of the incline. I will keep the targets the same for the next week of training.

On Wednesday I did an 9 mile steady run, but unusually for me, on a treadmill. I can never be accused of being a fine weather jogger, but the weather this week has been awful. There is flooding in many parts of the country. On Wednesday night, it was raining so hard and the ground was already so wet I decided to run at the gym.
I ran at a 11.5kph for 7.5miles, and wound it up to 13kph, and then 14kph for the last mile and a half.

After my speed session on Thursday I did an hour and a half in the gym, doing strength and stability exercises and then a half hour in the sauna. I'm probably going to repeat my nightly sauna sessions in the last two weeks before the KAEM in South Africa, just in case it does give any acclimatisation benefit. 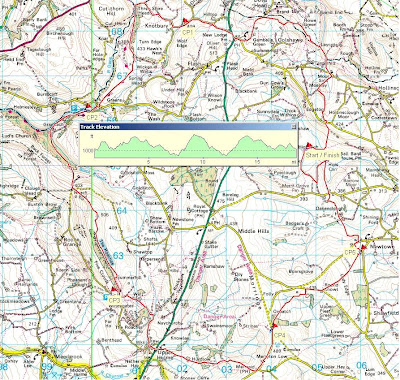 It rained hard all day Friday, and through into Saturday morning. As I got up at 7am and got ready for the LDWA Hills and Dales event, I knew the weather and terrain was going to be unpleasant. I wore running tights, and a waterproof jacket. I had only a light camelback rucksack, perhaps 2.5 kilo's in weight. I arrived at High Ash field study centre with about 20 minutes to spare and checked the route on the map there. The walkers had started at 8am, and a few runners were leaving early, before the scheduled start at 9am. I guess they wanted to get it over and done with because of the rain. About 150 were expected and only 70 turned up (all entrants). Only about 10 runners started at 9am, of which I was one. Clearly all of us made of sterner stuff than the people who had bailed on the event, and were lazing in bed!

Within 100 yards of the start everyone was ankle deep in mud and water, so wet feet straight away and so it would be for the whole course. I fell behind the other runners fairly quickly as I started steady. I was also really distracted for the first 3 hours. I had bitten my tongue on the drive to the event, whilst chewing on a sports bar and it wouldn't stop bleeding. Just a steady trickle of blood, which I was spitting out. I think because your mouth is always wet the blood doesn't clot, so a cut just bleeds. At times I ran with my finger pressed on my tongue, applying pressure, but when I took it off, it just bled again. It trickled away for 3 hours, eventually stopping when I tore up some of the route description and bit down on it for 20 minutes. So, that distraction did me no favours early on. Route finding was surprisingly difficult in the first few miles. I lost 15 minutes going the wrong way, and had to turn a group of 10 walkers (who I had already passed) around, who had made the same mistake as me. Then half a mile later, I could see maybe 20 walkers ahead who I thought were going the wrong (slightly longer, but less ascent) route. I spent 10 minutes searching for a near invisible path down into a valley, up the other side and then along a lane to the Travellers Rest pub on the Leek to Buxton Road. So before I got to checkpoint 1 I had lost half an hour with route finding, and was still suffering with my tongue injury! Great start!

The route after CP1 was familiar right up to CP4, so route finding became easy. My tongue stopped bleeding between CP2 and CP3, just before the long climb up to the Trig point at Roach End. I had run the Roaches section countless times in training, and I also knew the route to CP4 from memory, knowing areas of bad ground to avoid as well. Now the tongue distraction had gone, I was able to pick up my pace. I passed the last of the walkers before CP3 and had gone past the early start runners as well. After CP3 there is a fairly long climb up to the Mermaid pub (one of the highest pubs in England). There was a route choice of a shorter path over grass, or a longer path following a winding farm track. A group of 3 runners I could see quarter of a mile ahead had picked the most direct path, which I had made the mistake of choosing in the past. It is steeper, and the ground is shocking; up to the knees in mud. I stayed on the winding track and ended up quarter of a mile ahead of them in the space of a mile, once we all emerged on the road again. CP4 was a half mile up the road further, and they caught back up again as I had some juice there. They confirmed the ground was as bad as I remembered, and I think they'll remember the farm track for next time too.

I set off from CP4 just ahead of them, and was glad of GPS for the whole section to CP5 because there was little, and sometimes no path, through fields and later thick Heather. I waved to the 3 runners just behind a few times to make sure they stayed on the right track behind me, but lost sight of them before CP5. Two other runners had gone astray in the last section, and had fallen behind as well. I set off from CP5 for the last leg home. I felt a very sharp pain on my back and heard a buzzing noise. A bee or a wasp had got stuck between my back and my backpack and stung me. I had not been stung since I was a child and hoped my head didn't swell up to the size of a balloon! I tried not to think about it too much and ran on, but stings are quite sore.

I got to the finish, about 19 miles and 3700ft of ascent, in 4hrs 45. So, not very fast at all, but the ground, weather and all the little hiccups contributed to that. 3 or 4 other runners had finished well ahead, I think just over 4 hour’s maybe, and the others came in over the next half hour or so.

The catering on this event is the best! There are lots of friendly staff and the checkpoints and at the centre. They supplied a hot meal and had a tombola and a few things to buy; all for the Chernobyl Children’s Charity. I had a couple of cups of tea, to warm back up and set off home.

No LDWA event planed for next weekend, but I may take a look to see if anything appropriate is on. If not, I'll just stick to my training plan.