I took an extra days rest on Tuesday, hoping to rest my hamstring which I slightly pulled a couple of weeks ago, but haven't given it the opportunity to heal. It's nothing serious at all, just a niggle. I did however go to Yoga, which on reflection probably wasn't very wise as every posture seems to stretch the hamstrings. Did I mention I started Yoga last week? Well, I am doing it to try and lengthen my hamstrings and hopefully learn some breathing and relaxation exercises too. I can probably only devote two sessions a week to it, so I am not sure if I will see much, or any, benefit. However I am going to try and stick with it for 3 months, which is what they recommend to start seeing benefits.

On Wednesday I did a 10k trail route, again running through the local fields and woods in the pitch dark with my head torch on. I really do find these very enjoyable.

On Thursday I did a speed session; usual 8x400M then 4x800M. I forgot my stopwatch, but I know what pace to run at now. It's a little trickier running this session with a head torch on over a slightly uneven trail path, but I am managing ok. After the run I went straight to the gym for my usual strength and stability work. I seem to have retained a taste for the Sauna afterwards, something I had only ever done for my lame attempt at acclimation in the past. Anyway, it makes for a long training session on a Thursday night. I finish work at 5pm, and don't get back home until 9pm usually, and then have to eat as well.

On Friday evening I did my preparation for the Six Dales Circuit; a 26 mile Long Distance Walkers Association (LDWA) event, held in the Peak District every year. I entered last year, but couldn't go due to injury. I transferred the route from Memory Map onto my PDA, and my backup PDA, and fully charged my two GPS receivers. I always carry a backup just in case one goes down. I looked at the hill profile, memorising where the hills were and how long they went on for. This was he first of the errors I made. I had assumed the course was running in a clockwise direction. Not until I started the course, did I find out this year (as most years apparently) it was running anti-clockwise, so all my preparation was worthless! The only thing I did know was that tit was 26 miles long, went through six dales, and had about 3000ft of ascent. I checked the weather forecast and it said overcast, but no rain any hour all day. It would also feel like 13C even with any wind chill. I still put in a waterproof jacket anyway, and I packed 1.5l of electrolyte and a couple of snack bars.

Again, I didn't sleep that great on Friday night, knowing I had to be up early to get to the event. I wore some leggings and just a Helly Hansen long sleeve lifa, two pairs of socks and the MT800 shoes I wore in the Kalahari. It took me all of 30 seconds to remove the Velcro I had so lovingly taken a couple of days to stitch on badly.

The event course is shown below. Starting from Biggin, and going anti-clockwise. 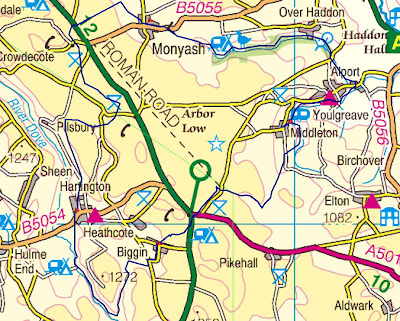 I drove to the event, getting there in plenty of time. The weather was damp, cold and drizzly rain. I met a friend Anne who was there running with her dog Daisy. I met Anne and her husband Vaughan on La Trans Aq in 2007, but Vaughan is injured at the moment, so Anne has been doing events alone. She wanted to hear about the Kalahari run so I set off running with her 10 minutes before the main runners start; 8:50am. Now, I knew already that Anne is a much faster runner than me, so I said I may have to drop off at some point. I started off wearing my waterproof jacket, but got so hot so quickly that I had to take it off. The problem was that it was raining a little and my Helly Hansen was getting wet. Still because I was running reasonably quickly, but still more slowly than Anne would normally run at, I was maintaining my body heat. The terrain was very mixed, parts were on good trails, but the fields were of course all very muddy, and some of the dales were rocky and there was rubble underfoot.

Now normally I would be running at around 5.5mph on one of these events, as it is a running pace that I can maintain. Of course there are stiles and gates to negotiate as well as hills and ground that you are forced to walk because it is so uneven. I didn't quite realise just how quickly we were running until I saw the speed profile when I got home.

When we were running we were running at over 7mph, you can see I highlighted a typical section 7.3mph. There are dips where you stop to cross a stile etc, but when running it was always around this pace. Ignore anything over 10mph because when we went into deep dales the GPS loses satellite lock and the signal bounces off the valley walls causing a bad and incorrect signal; ignore all pacing from 10-12 miles totally, and 22 miles onwards.

After 13 miles I could feel myself getting very hungry, I was running out of fuel. We happened to be in Lathkill dale which is very picky rocky footing and had slowed down. As I slowed I cooled rapidly due to my wet shirt and the wind. I told Anne to continue as I was going to slow and eat something as well as try and warm up. I put on my waterproof jacket, but it was too late really. Schoolboy error of getting my clothes wet and slowing my pace meant that I could not warm up. I walked whilst I ate a snack bar, which only made things worse. I was shivering. Fortunately I then arrived at CP2 at the village of Monyash. All the CPs were indoors and this one had hot tea and hot cheesy oatcakes. I apologise for everyone not from the local area who has no ides what oatcakes are, but they are like a savoury pancake and usually filled with cheese or bacon. I spent 5 minutes there warming back up with tea and oatcakes before setting off again.

Once back outside I got cold again very quickly, because my muscles had cooled even more. The constant drizzle rain and wind made it all pretty unpleasant. The next 3 or 4 miles were a long steady uphill across fields to Sparklow. I was struggling at this point, really feeling so cold than I wondered if I would have to quit. I was stupid for not packing a fleece to wear. This is the first event I have done in autumn, and the totally incorrect weather forecast had caught me off-guard as well. I managed to speed back up nearing the top of the incline and then hit a good trail for a couple of miles, before a couple of sharp climbs then a nice descent across the fields into Hartington. From the good trail onwards I picked my pace back up and warmed up again, much to my relief. It's amazing just how demoralised you feel when you are cold. I didn't waste any time at CP3 in Hartington; just grabbing a couple of cup fulls of juice and a couple of snack before leaving on the final 5 mile leg back to Biggin. Both hamstrings were aching at this point. I think this is evidence that I hadn't done an LDWA in such miserable terrain and conditions for a while. Further to that my left knee was causing me some discomfort too.

On the approach into Wolfscotedale there was some knee-high water across the muddy fields, which added to my cheer! Lots of the paths had been flooded anyway, so my feet had been wet from 1 mile into the run. Still my feet were in fine condition, no blisters or anything. After Wolfdscotedale was Biggin dale, which was utterly vile. If I never go through it again, it will be too soon. It was only about 2 miles long, but all gradually uphill and full of mud and rubble underfoot; I was forced to walk most of it. I was cursing it. After what seemed like an eternity I got back onto the road and just a short mile section before getting to the finish. It took me 5 and half hours; around 4.7mph. So, no record breaking performance due to my poor preparation for the most part. My knee was an aggravating factor as well. Still 26 miles in those conditions is faster than some people would do a flat road marathon in I guess. I drove home and had a lengthy soak in the bath!

I saw a physio about my knee, which has been troubling me for about 6 weeks. He was not sure if it is a popliteus problem or a small cartilage tear (I get severe pain when my knee is fully bent, or upon standing after being seated with a bent leg for a while). He suggested an MRI to confirm. I spoke to my uncle who suspects popliteus but also said it could be worth getting an MRI done to be sure. I'm due to pay the balance payment for the Atacama crossing this week, so I could do with knowing if this is just a minor problem or something requiring surgery before I part with a lot of money! My uncle is making a few calls and will let me know later if he can get me an MRI done tomorrow. It's also an opportunity to look at the calf on the same leg, which I have a reoccurring problem with. There looks to be a build up of scar tissue which keeps getting bigger and causing me issues when I start to increase my mileage before an event. So, this will possibly identify what is going on there, as well as hopefully rule out any major knee problem.

I'll keep you posted on the outcome of that. Have a good week!
Posted by Rich at 22:19