This week it has felt like my training has begun. The irony is that everyone else competing in the Atacama Crossing in 5 weeks time will probably be starting to taper their mileage, not ramp it up. If you've been following the blog, you'll know I'm carrying a knee injury. Anyway, I've ran 38 miles this week, further than I have run for a long time.

On Tuesday I decided to run just over 8 miles, instead of the 6 planned, clawing back some miles in order to make up for being unable to train last weekend. However, work meant that I could not start running later than I would have liked. As a result it was 8pm before I finished the run, and so I missed my Yoga class. Still, I figure running before yoga at this stage. The 8 mile run was hopefully my last with my head torch for the winter. I started in darkness, and ran an 8 mile trail route through the woods and over the fields. I didn't wear my knee brace but it felt ok.

On Wednesday I ran my planned 6 miles at a steady pace, but wearing my knee brace to see if it felt any different. I think the only difference is a higher degree of confidence in the joint. I'm considering adding it to my Atacama Crossing packing list. In fact I think it would be foolish to leave it at home.

On Thursday I decided to try a speed session. These sessions can certainly aggravate the knee, but I wanted to try one to see how much fitness I had lost. I run a 3 mile course as fast as I can manage, on the road. My best is averaging 6:52 minute miles. I was well down on that, at 7:20 minute miles, so 1 minute 30 seconds down for the total distance. I didn't expect to get anywhere near my best, but it's still a shock to see just how quickly your speed and sharpness is lost when you can't train for a few weeks. Speed sessions are my most valuable sessions for improving overall fitness, and it is a shame I'm not in condition to do more than one. I think it would be too risky. Still, I hope over the next few weeks to shave a few seconds a mile off each week. If the knee complains, then I'll stop them of course. After the run I did an hour in the gym doing core stability and strength, and some specific exercises to help with the Patellar Tendinosis. There are no exercises to fix the cartilage tear I am afraid!

On Friday I had a physio session; once more I had heat treatment and ultrasound, as well as massage on the joint.

Saturday I rested and prepared for Sundays event. I spent an hour late on Saturday adjusting my new Aarn Marathon Magic 30l backpack, to get it to my liking. I packed a few snacks and mixed up some electrolyte, decanted into two sports drinks bottles in the front pouches. I was keen to see how this pack would perform over a decent distance. I didn't pack too much weight, only 4kg.

I got up at 7am and drove the hour-long journey to Newburgh, near Wigan. I arrived about 15 minutes before the start, registered and got ready for the 9am start. The actual route, elevation and my speed profile for the course are shown below. 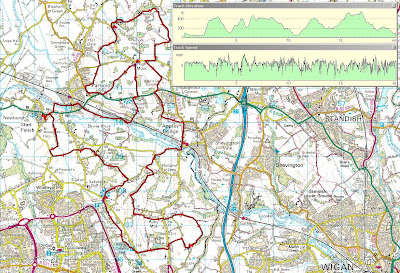 I set off from the back of the pack, as I like to, and the route soon joined the Leeds and Liverpool canal for a couple of miles. It's a nice flat and enjoyable section. The weather was pretty grey, a little blustery wind on the hills, chilly, but not too cold. I was wearing full length running tights, a long sleeve Helly Hansen top with a Pertex windproof jacket over the top. The route left the canal and heads steadily uphill to the first checkpoint. I didn't stop at any of the checkpoints today. I just gave in my number and carried on. I was carrying my own food and water supply of course. I need to get back into the habit of self-sufficiency again. There didn't look to be much food at the checkpoints anyway, which is unusual for LDWA events. Most checkpoints on these events are usually overflowing with malt loaf, cake, biscuits and sweet things. Today, most checkpoints only carried water or orange juice, though one or two may have had a little food.

After CP1, the route heads downhill on a farm track into the village of Parbold, and then turns north, heading uphill once more to CP2 at around the 6 mile-mark. The weather was beginning to look a little grimmer at this point. 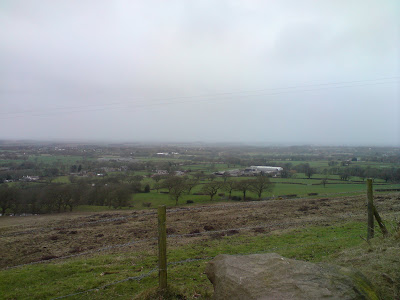 The route headed up Harrock Hill, which I think I captured in this picture, as I was passing a few runners, and catching up the walkers who had started at 8am. 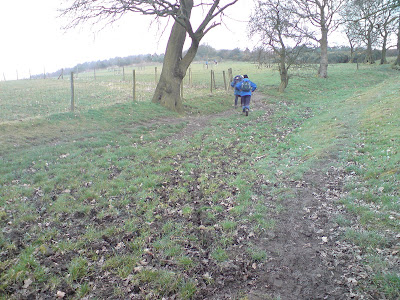 The view from the top. You can spot the rain drifting in from the right. 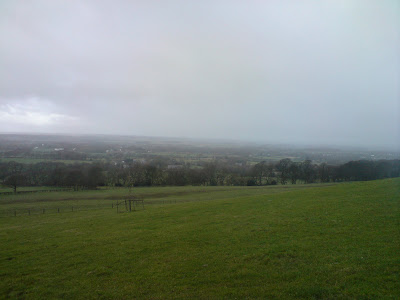 No sooner had I got to the top and the wind picked up, and the rain came down. Sheets of drizzle; the kind that really soaks you to the bone very quickly, began to drift in on the wind. The Pertex top I was wearing wasn't waterproof, and fairly quickly got wet. A few runners stopped to put their waterproofs on. I looked up at the sky and gambled that it may not last too long, as so didn't put mine on. The wet weather lasted perhaps half an hour at the most, and stopped. No further rain fell, so I guessed right! The rain had certainly stopped before I reached CP3 at the village of Appley Bridge, and half way point of the course.

Once more I just gave my number in at the CP and continued on. There isn't a great deal of ascent on the whole course; around 2200ft, but the vast majority of it is in between 10 and 16 miles. I had packed my walking poles on my pack, but decided not to use them. I would only use them in the event of a 'knee emergency'.

Most of the route is on good woodland paths, and the underfoot conditions were good. There were a few big patches of mud and marsh all day, but most were avoidable and my feet stayed pretty dry. The long gradients between 10 and 16 miles took their toll and by 15 miles my legs were feeling heavy. I had up to that point managed to maintain an average pace of 5mph over all. I went through CP4 just before 14 miles ok, but then the gradual pull up a muddy field, and then a decent farm track tired me out. The route then skirts a golf course, before passing the final checkpoint 5, and into the last short climb up to Ashurst's Beacon, pictured. 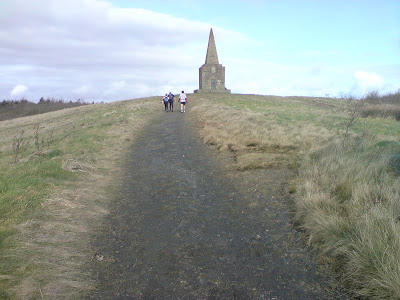 Views from the top. 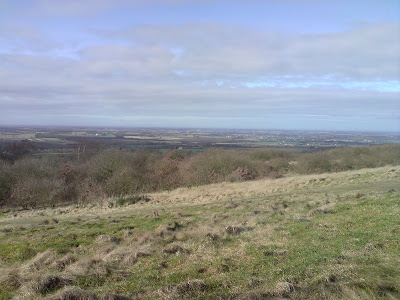 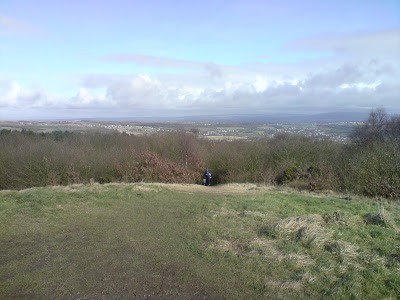 I tagged onto those runners you can see in the pictures for the rest of the route, and it was a good job. I was navigating from GPS, using the same route that I done in 2007. The organiser had mentioned that the last 2 miles had changed, but I didn't realise how much. Fortunately, I didn't have to get the route description out, and relied on one of the others who had reccied the course a couple of weeks earlier. Climbing over the Nth stile that day, we headed in, really made my upper legs ache! We trotted down a couple of fields and to the finish. It took me 4:09, GPS has the distance at 20.55 miles. Average speed 4.9mph overall. I think they did have a meal of pie, peas and gravy on, but that isn't really to my taste so I headed straight home.

It's the first time I had ran that far for 6 weeks. My heavy legs, towards the end of the run certainly showed that, but at the same time by knee wasn't a problem. I didn't need the walking poles or knee brace. The patellar tendon is aching as I type this 7 hours after finishing; the occasional spasm of pain, but I can live with it. I had stiffened up as I drove home, so getting out of the car was a slow and painful process. Let's see how my legs feel tomorrow.

The backpack performed very well. I was worried the front pouches may bounce with the weight of the water bottles, but at the speed I was running, which was typically around 5.5 - 6mph the bounce was ok. I didn't get any rubbing or soreness anywhere either, so the time invested in adjusting the pack last night, was well spent. One gripe was that the toggles which hold the walking poles in place are not strong enough and the poles end up waggling around a little after they work loose. I'm sure I can either replace the toggles, or use some ingenuity to secure them. Other than that, I'm very happy with the pack performance, and I will be using it on the Atacama Crossing. I've identified a couple of areas where the pack could be improved, so I'll probably email the manufacturer and suggest them for a future model.

So, my training has now begun in earnest. Slightly fewer miles this week coming, to ensure my knee has survived today, and also because the week after I am entering a 30 mile event. It will be my peak week. A little too close to the Atacama for my liking, but psychologically I feel I need one 30-miler in the bag to give me some confidence on the 45 mile day five in Chile.