Well, we are in the midst of a cold snap in the UK; the heaviest snowfalls for 20 years, with some areas getting a couple of feet of snow fall in just one day.

It's not so bad where I am, with just a few inches of snow a couple of times this week, but it's lingering around, making training a little more challenging.

This week was my first week back running, after taking three weeks off, to try and get over the acute pain from Patellar Tendinosis.

I decided to run my scheduled 4 mile trial run on a treadmill, which went ok, but after the run I can only describe my knee as feeling 'strange'. It didn't feel wholly stable afterwards, seemed to feel inflamed. However, after 10 minutes the feeling passed and I went in and did my 1.5 hour yoga session. Only 3 other people had braved the journey to the gym through the snow to attend the class. I am definitely a little more flexible than when I started. I still can't touch my toes, due to being almost certain I have been given children’s hamstrings by accident, but I live in hope!

On Wednesday I had planned a 10k, but opted for a 5 mile instead. I enjoyed running over the fields through the snow, up to the local Wedgewood monument landmark, and then down into nearby Apedale Country Park, for a run through the woods and trails there. I put thermal leggings, as well as running tights on, in an effort to keep my knee joint warm. I also wore my cho-pat knee strap as a precaution and to give me more confidence in the knee. I'm pleased to say that taking those measures seemed to ensure I didn't have any problems on the run. When I got back I iced both the back (the meniscus tear) and the front of the knee (Patellar Tendinosis), just to be safe.

On Thursday I decided to try my speed session, but it became more of a ‘brisk’ session due to the conditions underfoot. I did manage the 3 mile course at 7:30 minute miles, which is well down on my best at about 6:50 average, but I was running on snow and ice, and my fitness is certainly down from a month ago. I think I can be forgiven for the slower time. When I finished, I made use of the snow and piled some onto my knee joint for 10 minutes before going into the gym and doing an hours strength and stability exercises. I am focussing on a lot of squat exercises, and some squats on a decline board. These exercises have been clinically shown to improve Patellar Tendinosis. I am also doing some of these at home too.

On Friday I had a physio session, where I once more had short wave pulse heat treatment on the back of my knee, ultrasound on the front, and some massage on the patellar tendon too. The physio commented that the tendon was much better, and I agree since just the lightest touch was causing me pain 3 week ago. The physio is certainly helping, but the three weeks rest will of course be the major contributor to the recovery. We'll see how it feels in a week or two now I am back to running.

On Saturday instead of doing a planned 8 mile run, I did a 6 mile hill walk, taking in about 7-800ft of ascent. I started from a lovely old building in Cheshire called Little Moreton Hall, which I took a photo of below. 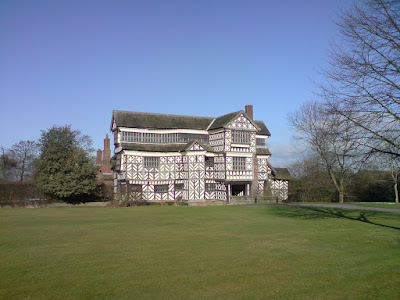 I then crossed fields, walked along the canal and began the ascent, soon reaching snow on the higher ground as I climbed towards Mow Cop (a folly ruin), and local high point. 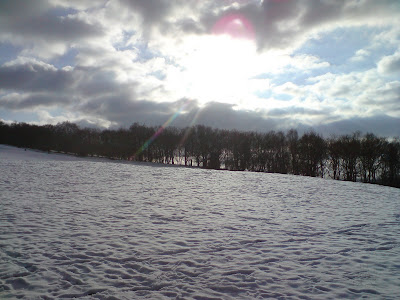 I should have taken a sledge! 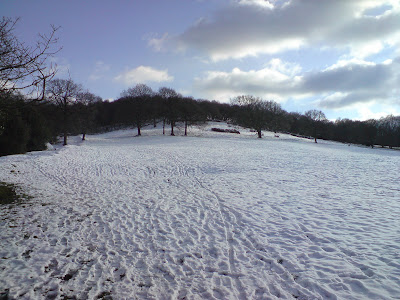 The path then goes through a small wood, which looked very pretty in the snow. 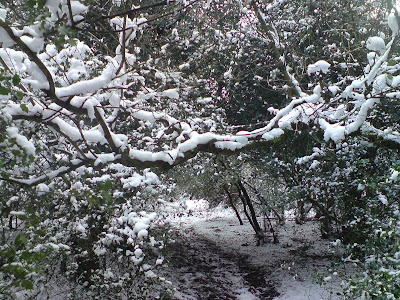 It then emerged back into fields for the last bit of ascent, with views over Cheshire seen here. 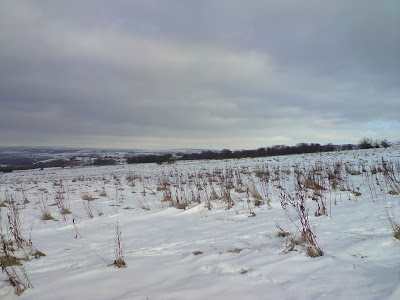 Then at the top, views over Staffordshire. 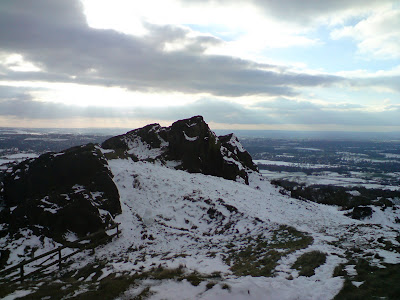 It was bitterly cold on the top. I added a couple more layers of clothes, a second pair of gloves, and a hat. I descended back a different route before rejoining the canal and making my way back to my car for the short drive home.

I am hoping to run as much as possible this week, despite there possibly being some quite substantial snowfall in my area over the next couple of days.

I saw a couple of episodes of "Extreme Dreams" on the BBC iplayer this week. It is a show where some 'ordinary people' join celebrity (and MDS finisher) Ben Fogle on some adventure. In Episodes 16-20 they are crossing the Atacama Desert. In all honesty the programme itself is crap. It is badly edited, horribly repetitive and thus nauseating to watch, but it did give me a great insight into the terrain I will be running on in 6 weeks time. The razor sharp salt flats literally sliced everyone’s shoes (soles and all!) to pieces, and tore holes in their clothes. I had heard the salt flats were uneven and tough to walk on, but I had no comprehension of just how bad they were. They are literally miles and miles of coral-like razor sharp and uneven terrain. Running is impossible, walking is difficult. An awful lot of this terrain is on the 2009 Atacama Crossing course. At least I know what to expect. If you are in the UK, you can go and view the TV show on iplayers website (BBC2) and see for yourself. Forewarned is forearmed and all that eh?

Oh, I amost forgot, two of the people went down with severe altitude sickness and had to be evac'd. One guy in one of those portable altitude bags. The altitude issue is playing on my mind a little. I fully realise exertion makes altitude sickness even worse, so I will have to be very careful in the first couple of days of the event. That is the prime time to be hit by the effects, which can vary from a headache to death! I've got my fingers crossed for headache.