Happy New Year to you all.

Over the Christmas period I have deliberately not done as much training. After getting the diagnosis of a Meniscus cartilage tear and Patellar Tendinosis of the left knee just before Christmas, I decided to cut back and try and rest the knee. I think I only ran twice, once on Christmas day, and then again the following Tuesday. I ran just a 10k and a 5k. Now my attention has been drawn towards it, I am noticing more discomfort in the knee just going about my daily business; walking around even. Just running short distances isn't bothering me too much at all though. I am hoping to see my uncle this week, give him my MRI film and report, and see what his prognosis is. I'll keep you updated with that.

I had entered The Hebden, an event I took part in last year, and decided that it might prove a good test for the knee. I wore my Cho-Pat knee brace as a precaution and to give me more confidence that the knee would not give-way underneath me on a decent. The Hebden is a quite a tough event, despite being only 22 miles. There is 4600ft of ascent and it's very much a rollercoaster; practically no flat terrain at all. I packed a light pack, probably no more than 4kg, containing 1.5l of water and plenty of extra clothes as it was forecast to be sub zero all day. I got up at 5:30am and set off for Mytholmroyd, arriving at 7:30, in plenty of time for the 8am start. As always the registration and organisation of the event was excellent, and there was tea and toast available to all before the start.

The course had undergone a few changes from last year. There was an awful bottleneck 300yrds form the start which has now been avoided, and some particularly muddy stretches have been avoided too. None of the elevation was removed though; in fact if anything I think there was a little more than last year. The weather was dry all day, but cold. Certainly sub zero up on the higher ground, and barely above zero lower down. There was no rain thankfully and very little mud. Last year the conditions underfoot were pretty awful, so the dry weather was very welcome.

Below is the route, along with the elevation and my speed profile for the event. 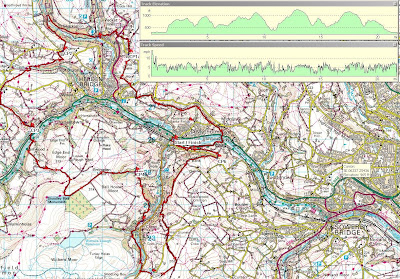 We set off at 8am. I am not sure how many of the 300 participants were runners, but I would estimate perhaps up to 150. We enjoyed a mile of flat terrain (the only such ground all day really) before the first stern climb out of Mytholmroyd. The pace slowed to a single file walk up the hill for everyone, except maybe the few lead runners who quite possible ran it. It's a steady climb for 2.5 miles, before a short welcome downhill on a road, then another climb up to the 5 mile mark and first checkpoint. The food at the checkpoints was excellent. It varied from CP to CP, but there was always water or juice, hot tea at others, and also a selection of high energy foods such as Stollen, Peanut Butter Kit Kats, assorted cakes and sandwiches.

Between CP1 and CP2 the route had undergone a substantial change, making for faster progress. Overall it is a steady climb between mile 5 and 10, before a welcome but picky descent on a narrow path to CP3 neat mile 11. Following CP3 is the biggest climb of the day up towards Stoodley Pike Monument, a needle-like obelisk that can be seen for miles around. It is a climb of about 2.5 miles and around 1000ft up across End Edge and Errigden Moors. The navigation is a little tricky, locating a stairway descent into woodland, but I found it no problem having done it the previous year. CP4 was at the exit to the woods around the 14 mile mark. So far although it was readily apparent that my knee was substantially weaker than the other, I was not getting any pain. My whole left leg was generally more tired than the right though.

The route between CP4 and CP5 had changed, to avoid some poor ground I believe. The route has been helpfully marked which made what could have been some tricky navigation very easy. The final hill of the event up to CP5 and just beyond is quite draining, as you climb out of Crag Vale, but it's shorter than the other climbs. I didn't stop at any CP for more than a minute or so, just taking on a little liquid and grabbing some food to eat as I went. After cresting the hill after CP5 it is downhill all the way to CP6, and to the finish. There was food supplied at the finish, but unlike the CP food, it wasn't so good (pork pie and peas - not the healthiest choice in the world!), so I decided to go straight home. I finished in exactly 5 hours, with an average speed of 4.4mph. Last year I carried an MDS-weight pack and it took me 5hrs 50 with an average of 3.7mph. Better fitness and not just a lighter pack enabled me to get a better time this year. Fully fit, I'm sure I could do much better next year. My knee didn't at any point give me pain, but it did feel weak throughout. I didn't have a high degree of confidence when descending, and felt as though it might give-way and buckle sometimes. I certainly favoured my good leg I noticed. I would spend less time on the damaged left leg, especially when descending, taking a short step with it, and letting the right leg take the bigger stride.

So, the test was inconclusive; I managed the event, but could I have managed 50 miles?? I don't know, but I doubt it. I need some expert advice and a prognosis on what I can do, if anything to get my knee fit for the Atacama Crossing which is only 12 weeks away now. It's possibly I have to pursue pulling out through injury, and trying to claim the entry fee and flight costs back. Until I get a prognosis later this week I just don't know.