This coming weekend is The Saunders Mountain Marathon. My friend Mike asked me to partner him in this event a few months ago. Mike has done plenty of fell racing in the past, but this will be his first full mountain marathon. I’ve done a couple of MM’s in the past so we are both relatively new to this. Due to my on-going injury since March, and schedule clashes we have only (ever) been out on a run together once, and that was 2 weeks after the Atacama Crossing in March. That was in the Kipling Caper, the last time I managed to do a distance of more than 3 miles without pain. We decided to try and schedule in one last opportunity to train this weekend just gone, and so Mike found The Staffordshire Moorlands Anytime Challenge, which starts and ends at the Cat and Fiddle pub in the Peak District near Buxton and visits 5 Trig points. You can take any route you choose. The idea behind this was that we practice our navigation skills, rather than try and run it all. This was always going to be the case as I’m just not capable of running these kinds of distances at the moment. The route we took is shown below. The flags are the Trigs. 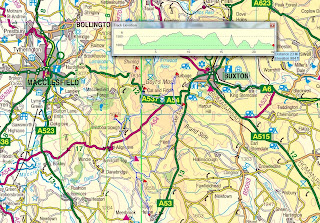 We actually started the route from Hen Cloud in the Roaches (bottom of the route marked), rather than the Cat and Fiddle pub, so we visited The Roaches trig point first. It was the hottest day of the year so far with temperatures around 30C. Mike carried his event weight rucksack, but I opted to carry just a few kilo’s (mostly water), as I knew I would struggle anyway. We took a steady walk up the Trig point and then plotted our route to Axe Edge trig point. The route was a mixture of footpath and road. Unfortunately we appeared to make a navigation error at the bottom of The Roaches. We didn’t spot a footpath to our right and so continued straight ahead, heading down into a valley. After a few minutes I realised, but neither of us could recall seeing any footpath split, so we decided to carry down and then cut right later. This probably cost us 10 minutes as the terrain was rough (no path), over heather and gorse. Eventually we got onto our intended route and carried on. Returning that way towards the end of the day it transpired than the footpath split was gone. There was some barb wire over a broken wall, so I wonder if a either the path has been diverted (no notice there) or the landowner of a nearby house has illegally removed it. I’ll contact the local council and ask them if a footpath divert was in effect. My ordnance survey map was 1 day old, so I’d be surprised if it was wrong.

Back on the route we climbed out of the valley and onto a road, climbing further until we reached the village of Flash, which boasts as the highest village shops and pub in England. We crossed the busy A road here, over Oliver Hill and then across rough moorland and up to Axe Edge Trig, then down and up over rough moorland to Burbage Edge which sits overlooking Buxton. We had done about 10 miles at this point, and my stomach pain was just beginning to kick in, which was an improvement but nevertheless an unwelcome reminder that I’m still injured, some 4 months after Chile. The most direct route across was across the valley to The Cat and Fiddle and nearby Shining Tor trig point but we came to the decision that although about .6 of a mile further, taking a wide arc on good footpath and quiet roads would be faster, not least because it meant remaining on higher ground, and not losing all the height in a descent to Goyts Moss valley, before a tough climb up to the Cat and Fiddle. Later on at home, I checked this out and it was a good decision, we would have had to climb 300ft more by going direct over the tougher terrain.

When we got to the Cat and Fiddle we decided not to go and tag the nearby (mile each way on a wide and often paved path) Shining Tor trig, due to my discomfort, and would so take a direct route to the next trig at Shuttlinsloe. Normally you would likely drop down from Shining Tor and head up through Macclesfield Forest and approach Shuttlinsloe from the back. It’s a very steady and easy climb this way. However, from where we were we took a direct route down to the base of the next valley down a stony path, which is frequently just like running down a river. However, the current dry spell in the UK had totally dried the river up. We stopped to check our nav and felt a sharp bite on my quad, looking down to see a horse fly cutting into me. I swatted it away but damage was done, and i’ve since grown an extra (not to mention itchy) red quad muscle in the last 24 hours. From there was a short run followed by an unpleasant hike up the front of Shuttlinsloe which gets gradually steeper almost to the point of involving a scramble to reach the Trig. We came down off the top quite fast, but I was already really beginning to struggle so Mike had to slow up significantly for me. We lost all the height we had just gained, then straight back up again, and then lost it all once more as we descended to Gradbach Youth Hostel on the River Dane. From there we ran for the next mile or so then hiked up through the woods climbing back up to Roach End, where I noted the missing footpath. We had taken longer than anticipated, due to my struggle, and so opted not to go back up to Roach End, which would have meant another 10 minute climb on top of the route, and so ran the 2 miles or so back to the cars on the road at Hen Cloud.

I was in quite a lot of pain as I struggled those last couple of miles and was glad to see the car. I had used my entire water ration, and even drank some water that Mike had refilled from a stream en-route. It had been a very long and hot day. I checked the route back home and it was 23 miles in total, from car to car, and had over 4300ft of ascent. Including all the walking I had to do it had taken 5hrs 50 mins. We were happy with our navigation, which was the main aim, though to be fair there were some sections which both of us could have run blindfold.

Next week we will face around 20 miles with about 6000ft of ascent on day 1, and perhaps 15 miles and 3500ft on day 2. I was pretty shattered after the run, my stomach, back and gluts all hurt, and my fitness is a pale shadow of what it was in March. After a days rest my stomach pain wasn’t as bad as it has been of recent, however I couldn't get up out of a chair without using my arms for assist, as I had severe lower back isssues on the left side, causing sharp nerve pain and weakness. It has been locked up in there for months and no one has been able to release it. My pelvis is tilted and rotated permanently, and it’s highly likely that is the central issue to my woes. The torsion is putting stress on my stomach muscles etc and causing me pain. That’s the latest theory anyway. It’s now Tuesday and I can up out of a chair again, but my back is still locked up tight, and my stomach and gluts are sore. I have a sports massage booked in at midday. From what I understand the therapist is in training as an osteopath as well, so he’ll likely try and get my back to release a little. The sad thing is, there is no chance that it will be successful in just one treatment. So, I will go into The Saunders in a pretty sorry state, hopefully patched up enough that I don’t have to pull out before the start line, let alone half way around.

In other news, I’ve sent best wishes to some friends all running in the 4deserts Gobi March event in China right now. Tremaine, Diego, Christian, Lucy, and the two Samantha’s are all taking part. Good luck to them all, I’m sure they’ll do well. That’s it for now. Good luck to me this coming weekend, I’ll put a write up as usual, assuming I’m well enough to go.