You might have thought otherwise in the 2 months since the last past. As those last few said I have some kind of stomach injury that I picked up in the Atacama. I ran once, two weeks after the event in mid March and then didn't run again for 2 months, assuming whatever it was would have gone. I was wrong. So that was a month ago and after 3 miles I got the same stomach pain, and had to stop. I thought it was a strain of my rectus abdominus, but this seemed pretty unlikely with no improvement after 2 months. I saw a physio at work who was, frankly, an utter waste of money. Her expert diagnosis was, I quote, "Well it could be a lot of things but it's definitely muscular".
Yeah thanks for that; that was well worth £50...
I started to wonder if it was my back referring pain to my stomach so I saw a local chiropractor. My back needed some attention anyway as it was very tight. The chiro said my illiopsoas muscle (a deep stomach muscle) was very tight. It's a very tough muscle to get at, and incredibly painful to work on. He's had a couple of goes at that as well as my back in the last month. My friend Mike, who is a physio where I live said he'd have a look at me, and he believes it is my hip flexor. He's given me some treatment in the last couple of weeks, at the same time I've been having the chiropractic. Between the two treatments I think I am starting to improve. I have run a few times, just 3 miles each time. The following morning though I have still been getting stomach pain. It's very low down above my pelvic bone, just above to the right. It hurts if I sit up from lying down, and it hurts if I lift my right leg. The pain usually dulls after a couple of days rest.

Last weekend I went camping in Wales. I climbed Cadair Idris, which is a mountain near Dolgellau. The weather was terrible, with heavy rain and low cloud. There were no views from the top (supposed to be very impressive on a good day). Instead I could see about 20-30m, and that was it. The substantial summit shelter (with a roof!) was very welcome. I was in full waterproofs at this stage. It happened that it was the day of the local fell race from the town to the top and back, so there were people running up to the trig with shorts and singlets on. Brave people! It was a 10.4 miles course they were running with about 900m of ascent, which the winner completed in about an hour and a half. I was just walking and only doing about 6.5 miles in a horseshow route on the Minfford path, though the same amount of ascent.

I camped that night in the Lleyn Peninsula where there is very little mobile phone cover in places. I got a waft of a mobile signal at 8am and then had to drive 6 miles to get a signal, responding to a text from my (5 year old) son's mum to call me, sent at 00:45 saying I needed to call her.  They had been travelling back from Wales themselves the previous night when they were involved in a head on collision with a drunk, and uninsured driver, who had tried to overtake another driver on a blind hill, in the dark in poor weather conditions. To make it worse he was also already banned from driving. They are alive through a mixture of luck (they were in a loaned car and not their own little Smart car) and the quick reaction of my Son's Mum to brake to almost a stop. The pictures of their car are sobering, even the police can't believe they survived. Anyway, they escaped with cuts and bruises, and minor injuries. The other driver was breathalised and then arrested. He's in court on Friday to enter a plea, let's hope they lock him up when he gets sentenced.

After being reassured they were ok, and there was nothing I could do I did then stay for the rest of the weekend. I did a 20 mile route on the Sunday, with a couple of small hills (less than 600m ascent overall), and managed to run the last 7 miles. 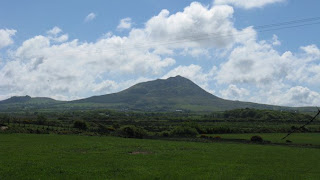 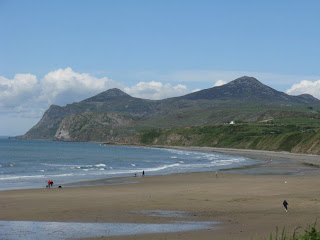 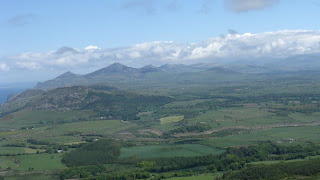 I did pay for it in stomach pain the next day. I have been doing daily stretching, so stretched out in the morning sufficient to allow me to complete an 8 mile circular walk from Beddgelert, climbing Moel Hebog and 2 or 3 neighbouring mountains afterwards, returning through Beddgelert forest. 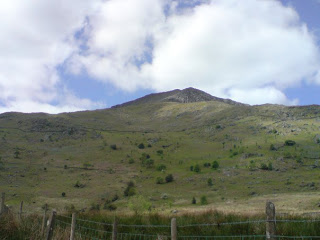 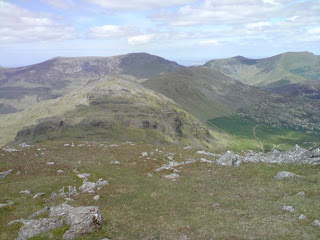 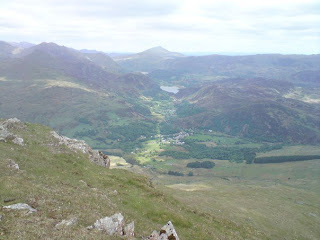 I ran 3 times in the week, again only 3 miles each time, with plenty of stretching in between. On Saturday I went for a trail run in my road shoes (foolish), slipped and fell hard on my back with my neck at a funny angle, to an unpleasant crack. I got up, established that I could turn my head left and up, but not right or look down. I figured I'd locked a facet in my neck. It was very painful but I elected to run on since I was almost half way through the run. I got back having completed 10k, and iced my neck, but already knew that it was going to do little to east to pain. Mike came around to give me some more treatment on my back and stomach. Better news is that on Sunday I had less stomach pain. I slept very badly on Sunday, the slightest turn of the head causing a lot of pain. I got a cancellation appointment with the chiropractor early on Monday and put my neck back where it was supposed to be. I'm now on Diclofenac for a few days. It's still sore but I can now turn my head again. Hopefully I'll be up to running on Wednesday or Thursday.


So, I've had some rough times over the last couple of months. I just hope that this is just my hip flexor and it will go away with all this treatment.

One reason Mike has been treating me is that he is my teammate in the Saunders Mountain Marathon in a month's time. It's being held in Sleddale which I've never heard of. It's somewhere near Shap, in the Lake District, apparently. We are entered into the Bowfell Class which is one of the tougher classes I understand. Minimum distance is 15.5 miles and 1800M of ascent on day 1, and 11 miles and 1000M of ascent on day 2. It's likely that we will do closer to 20 miles and 15 miles respectively, I suspect. I've only taken part in a couple of mountain marathons, so I'm really very much a newbie to them. This is Mike's first, but he has had a lot of fell running experience, and is in much better shape than me right now. He completed the Helvellyn Fell Race a couple of weeks ago, and did a 19 mile Paddy Buckley support leg last weekend. Needless to say, the last time I ran more than even 7 miles was more than 3 months ago, in Chile!

All I can do for now is keep running short distances, to hopefully prevent this injury getting worse, and try and muddle my way through the Saunders. 3 months ago I was at peak fitness, but that's all gone. My recent attempts to run just 3 miles have illustrated that. So right now, normal service is not yet resumed, but I'm trying to work through it. I'll keep you posted. Have a good week.
Posted by Rich at 07:26