Checked into the hotel the night I arrived early and shared a room with James, who I met in the 2008 MDS.  The following morning a group of us went on an excursion to to the High Altitude Geysers at 4:30am.  It was cold up at 4300M altitude but we were rewarded with sights of all of the geysers.  I even swam in the hot springs, which was amazing.  I've posted a few photo's below. 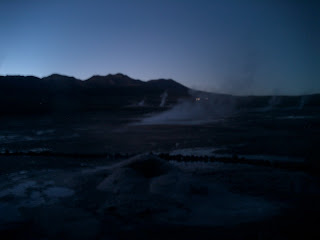 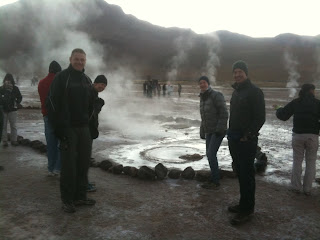 Some of the peole in my Tent above, Ian, Joasia, and James; all from the UK 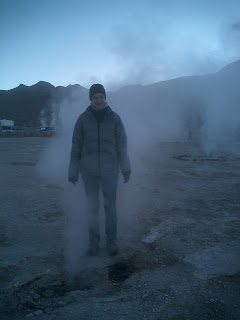 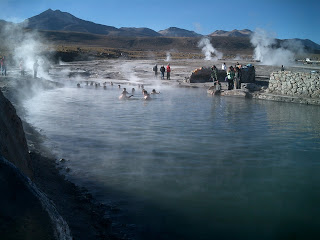 The Hot Springs where I swam.  There is a photo, I'll get sent to me later!
We got back before Lunch and spent an easy day resting.  Had a good nights sleep and got up for the admin day.
Just completed my kit check.  The race scales say my pack weighs 6.7kg.  I know that's not right.  I think they are weighing too light by about 2-300g.  After breakfast tomorrow my pack will weigh about 6.7kg.  Still it's giving some people a psychological boost thinking their pack is a little lighter than they thought.
The kit checks will be ongoing for the next few hours then we board the bus at 3pm for an hour and a half transfer into the desert for tomorrow's start.

I've seen the route book, and with a few minor changes the course is more or less identical to last years race.  This is comforting for me, at least unti lhalf way through stage three.  But it's the second half of the race that I haven't seen, and it's the toughest.

Still I'm confident and looking forward to getting out there now.  The temperature is around 35C, and likely a little hotter in the sandy and rocky canyon's.

You can wish me good luck from the race website, all week.  http://www.4deserts.com/atacamacrossing/
under "Race Coverage", "email a competitor".  I'll start to post blog updates after stage one has completed tomorrow afternoon.
Posted by Rich at 14:39