The cold snap continues in the UK. There has been snow on the ground accross the whole country for over a week now, and temperatures have been remaining below zero during the day. I was working away in London for some of the week, so running on some unfamiliar territory.

Fortunately I am a member of a national chain of Gym's, so I could do my speed work on the treadmill. There is snow and ice all over the roads and pavements, so running at real speed just isn't very easy outside. Over the next 6 weeks I will aim to build up my speed and fitness by doing more speed work. Tuesday's session is a 5 minute warm up then a 20 minute flat out run. At the moment the clock runs out before I reach 3 miles, but over the next few weeks I should hit 3 miles and maybe a little further. Trying to beat last week’s time is my measure of fitness.

On Wednesday I ran back from the office in central London to Camden where I was staying. However, that would just have been a few miles in a straight line, so I had to be creative with the route, as I needed to do 10 miles. I work near Waterloo, by the London Eye, so I joined the River Thames path and ran along to Chelsea and headed North at Battersea Bridge. I ran up to Hyde Park, right around the edge it (it's closed at dusk and I was running after 6pm) then ran along Oxford Street then up and around Regents Park and into Camden. It was a cold and icy run. I wore a Helly Hansen base layer, an under armour cold gear top, and a lightweight Pertex windproof jacket, plus a hat and gloves too. I wore some new Under Armour trail shoes to give me some much needed grip on the slippery pavements. I wasn't sure of the way, but tried to recall it from the Google Map of the route I had created. A couple of times I took out my phone and looked at the GPS just to be sure I was on the right route. Oxford Street looked nice as all of the Christmas lights were still up. I certainly needed all those layers of clothes, as it was about -5C. The ground was of course pretty slippy, and did slow me down. I try to run Wednesday’s session at a tempo pace. Not flat out, but certainly putting a good effort in. I couldn't run the 10 miles anyway near the kind of speed I would do in dry conditions, and also the constant road crossings in Central London slowed me down. Nevertheless I did it in under an hour and a half, so that was good enough.

12 hours later, and I was up at 6am to run 10 miles back into work, but at a steadier pace and with a backpack of clothes, towel, wash kit etc. I intended to run the same route in reverse, but being unfamiliar with London I managed to turn myself round 180 degrees somewhere, and found myself running back the way I had just come (somewhere near Hyde Park)! So, then realising I had added some extra distance on, I cut through Hyde Park itself and headed straight for Waterloo, passing Buckingham Palace and the Houses of Parliament on the way. Here is a shot I snapped as I passed. 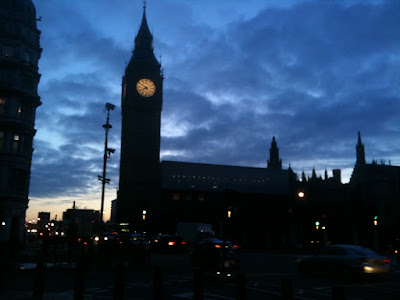 The footpaths around there and most of the major shopping roads were all more of less clear of ice, but further out the ice and snow persists still. It was more luck than judgement that the route ended up being just a fraction over 10 miles by the time I got to the office. At lunchtime I had a sports massage from a therapist who visits the office, which is very useful. He spent 40 minutes on my IS (stomach), gluts, and ITB (all right side), which is still giving me some problems. It was a pretty painful session, but I did feel better afterwards.

Normally I would go to the gym on a Thursday night, but my gf had come down and we went to see a show in London, the Misanthrope with Damian Lewis and Keira Knightley; I confess Keira was the main attraction for me! Really enjoyed the play.

I came back home on Friday and on Saturday Morning I planned myself a 20 mile route. There was more snow back at home on the ground, so I put my fell shoes on which have even more grip that my trail shoes; they have 6mm studs. I ran up to a local monument atop a hill where lots of kids were sledging, pictured. 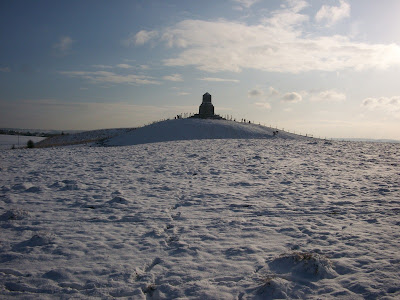 So, standing at the top, there is a very steep slope for about 30m, then it shoots back uphill for about 5m, before the slope downhill continues. Needless to say it was snow covered and very slippery. The kids asked if I wanted a sledge as I was about to run down it. I just went for it, and ran down as fast as I could. A little too fast, making it to the bottom ok, but carrying so much speed on the slippy ground that I made it down ok, but had too much downward momentum and stumbled and fell as the ground began to rise again. Much to the amusement and cheers of the kids! I put up my hands to wave to them in an embarrassed acknowledgement, picked myself up and continued. I picked up a nice bruise on my shin for my trouble, but otherwise got away with it.

I took a few other photos from near the top, as seen below. Very pretty, and very chilly as you can imagine, sub zero all day. It was -4 at my house, and quite a bit colder up on the hills and in the wind. 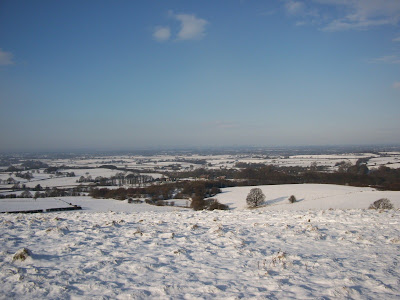 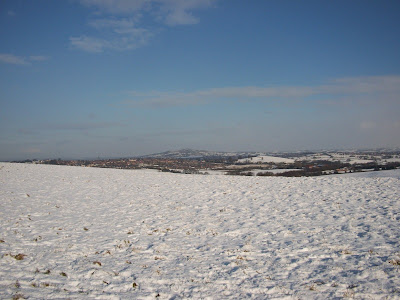 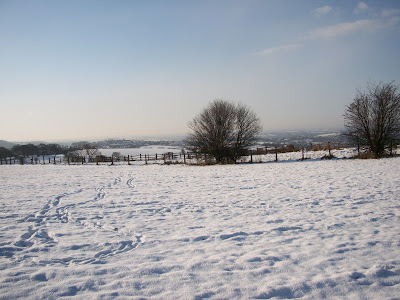 My route continued on familiar paths for the first 7 miles and then there was a section in the middle that I did not know, so I had saved the route on Google Maps, so I could access it on my iphone. This went well until the battery ran out because the GPS uses so much juice. Also I realised that I had uploaded the wrong route. I had put a 22 mile route on, which I had subsequently gone and shortened to 20, but not uploaded it. So I was in the middle of a 22 mile route, and now lost (I took a photo to commemorate the incident :) ). I had set off after midday, so the light was already beginning to fade. 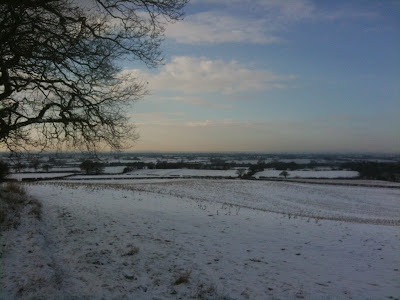 I followed an abandoned railway line which lead me to a road and then used my sense of direction to get me to the village of Madeley. There I asked directions to use the footpaths, rather than the road route, which I knew. I was literally making the route up as I went along, trying to trim it back down to 20 miles. I had only packed a litre of water which ran out about 5 miles before I got home. Amazing how much water I drank in the freezing cold conditions. I didn't really pack enough food either, so was pretty low on energy towards the end. I walked a mile long hill on a road at the 15 mile mark, but other than that ran the rest of the route, which included a few short sharp climbs. I got home, feeling pretty shattered to be honest, because of not taking along food. I ended up doing 21 miles, and around 2000ft of ascent. Getting lost, found, and directed as well as the brief walk meant it took me 4 hours and 20 minutes, but considering the icy frozen ground it wasn't too bad.

Forcing myself to even start the run took some willpower. The last thing you want to do is leave a nice warm house and run 20 miles through the snow in sub zero temperatures. There was never any doubt that I'd actually do it though. It's one of those times where I think to myself, if you don't do the run then you don't deserve to finish the Atacama Crossing. It's mental training as much as physical. Suffering during training, helps you dig deep and get through the tough times in the actual ultra distance races.

So, 44 miles covered last week. I have a recovery week scheduled this week. This means reduced distances, just before my final few weeks of high mileage, tough training and events. Work have not yet given me the green light to take part in the Atacama Crossing yet. I'm pushing for an answer again this week.